I first met him while working as a sales associate for KB Toys in Mentor, Ohio. He was one of my best customers. I didn’t know his name, but I knew what he was always looking for…”Video Games and Starting Lineup Sports Figurines.” We didn’t become friends until we both started working together for the kids playland Discovery Zone.

During the first employee training session I heard,  “Hey Toy Man” from the back of the room. That’s how our friendship began. He’s been my boss, I’ve been his boss. We’ve been there to support each other during the best parts of our lives and doing the not so great parts of our lives. We’ve been in each other’s weddings. His dad once introduced me as his “son.” We even took an “illegal” photo on one of the greens at Augusta National during the Masters Golf Tournament. Simply put, we have history together and he’s someone I will always trust.

Scott is an educator in Painesville, Ohio. He’s been offered teaching positions in school districts across the country, but he chose to work in the school district he attended as a K-12 student. Scott has done some pretty amazing things in his life. He uses many of his experiences to improve the education of the students he works with.

This month I want to share Scott’s story of how he turned his love for space exploration into a reality with the NASA Educator Astronaut Program. 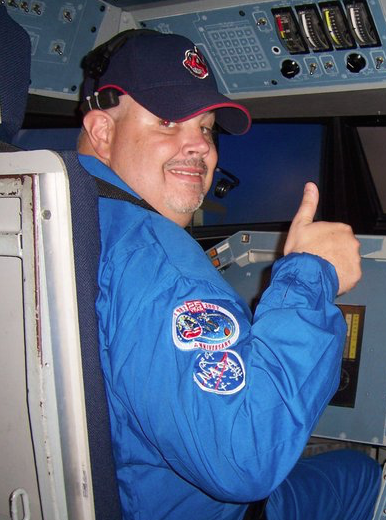 Have you always loved Space?

I have always loved space and science, which is one of the main reasons that I became a science teacher and decided to work in the same district that I went to school in. The idea of wondering what is out "there" and what else could be out there fascinates me to this day.

What is the teacher in Space Program?

How did you become a participant? Did you think you would be selected?

I was lucky enough to be selected and sponsored by Honeywell to attend the U.S. Space and Rocket Center in Huntsville, Alabama where we went through many of the same drills that astronauts endure. We also participated in two different simulated space shuttle launches where candidates simulated every part of the launch process. Additionally, we were also provided opportunities to construct lessons to take back to our respective math and science classes.

You got to travel to Huntsville, Alabama for real astronaut training.  What are some of your favorite parts of the training?

Listening to actual astronauts in person proved to be very inspiring. It was inspiring to see people in the position that you hope to be in someday. It was a week of amazement!

Is it true you were one of the only participants not to crash the space shuttle during the reentry training?

After being one of the few people to land the shuttle successfully and completing all the astronaut training, what happened next?

I applied for this program, and made it fairly far, but ultimately not far enough to be chosen as an Educator Astronaut.

You weren't selected as a finalist for the program, but you made it farther than most? What did you learn about yourself personally and professionally? How did the program help you grow?

Although I was not able to pursue my dream as an astronaut, there were still many positive experiences that I can reflect on and take solace in the fact that I gave it my best effort.

Positives Experiences? What positives did you experience?

I also was lucky to attend a Zero-G flight sponsored by Northrop-Grumman. This took place in a specially modified 727 jet that does a series of parabolas that simulates a zero-g atmosphere. What actually happens is that the jet dives at exactly the same speed as you fall, so you appear to be weightless. Things float, you can do somersaults in the air, and you can have a lot of fun. We also had experiments to do, and we completed those to see what kind of effect gravity (or the lack thereof) would have on them. If you are so inclined, you too can go on the Zero-G flight, but it is a little pricey (thanks again to Northrop Grumman for sponsoring me), coming in at $4,950 +5% tax. I loved every second of that experience. It really made me feel like an astronaut! I also have more weightless time than some actual astronauts! Pretty cool stuff! I highly recommend it!

You have a passion for science and technology that you share with your students, co-workers and friends. After participating in the selection process, what learning lessons did you share with the people closest to you?

My love for space and golf has enabled me to do some amazing things that I never thought that I would experience. They seemed pretty impossible growing up in the small town that I now live and work in. My parents always instilled in me a love of education and a sense that I could do anything if I put my mind to it. I thank them for that. I would say to everyone, "Have a motor". It's not a coincidence that those that work hard (have a motor) seem to have things go their way. I have always told my basketball players and golfers that "hard work erases many mistakes", and I believe that. Have a plan, stick to it, and be patient.

For people reading this article, what advice can you share about turning a passion into a reality?

Actually do it! There are many people who always say "what if", but it takes dedication to get to another level where you start to put the puzzle pieces in place to make your dreams happen. I love golf, and I was able to position myself to be a golf coach in the school district I work in. The important fact is, it did not happen overnight. I started at the bottom, as a non-paying volunteer assistant. I then coached at the middle school, and then climbed the coaching ladder and am now in my 12th season as the Varsity Head Coach. Another example of this patience is the fact that I was entered in the lottery in the Masters Golf Tournament for 15 years before I was finally selected in 2014. I was patient, and my patience eventually paid off in that was able to go to one of the most prestigious golf tournaments/sporting events in the entire world. The main point is that I was patient and waited for my opportunities in both of these scenarios. I think that most people are not willing to do this today in this age of immediacy. The ability to be patient is a lost virtue.

Scott, Thank you for being my best friend and sharing the stories of your space adventure that only a special few get to experience. Where can people learn more about the program?